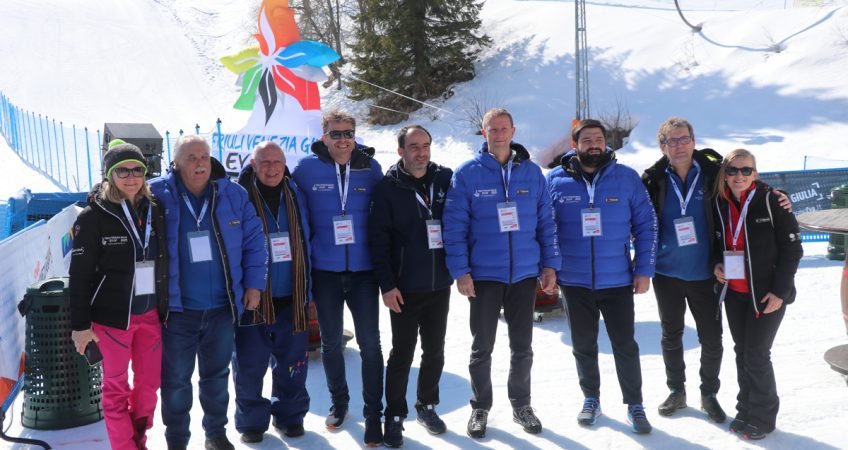 Amaro. Third visit to the region by the EOC (European Olympic Committees) monitoring committee. The delegation, consisting of Borut Kolaric, Director of Sport Peter Brull and Members Mamuka Khabareli and Joseph Cassar, spent five days, from the 8th to the 12th of March 2022, visiting other venues of the European Youth Olympic Festival, which will take place from the 21st to the 28th of January next year and will involve young athletes (14 to 18 years old) from 48 countries.

The European working group was accompanied on this tour by Eyof 2023 President Maurizio Dunnhofer, Vice-President Giorgio Brandolin and General Manager Giorgio Kaidisch. The visit started on Tuesday the 8th of March at the Eissportarena in Spittal, Austria, which will host the women’s hockey tournament. The second stop was in Udine, at HALL 6 of the Friuli Fairgrounds, to see the venue where the men’s hockey games will be held. The third day was dedicated to the Carnic resorts of Ravascletto/Zoncolan, home of freestyle and ski-cross, and Forni di Sopra, a centre dedicated to ski mountaineering. On Friday, the 11th and Saturday the 12th, the committee went to the “Alceo Della Valentina” ice rink in Claut, the curling arena, and then moved on to Piancavallo to watch the snowboard world cup competitions. A discipline that the aforementioned ski resort will host at Eyof 2023. In addition to checking the competition facilities, the EOC members also wanted to check some accommodation facilities and discuss other logistical aspects.

At the end of the visit, the President of the European Olympic Commission, Borut Kolaric, said he was very satisfied with the work done so far by the Eyof 2023 Executive Committee. Considerations echoed by sports director Peter Brull. I am sure that some of the athletes who will be stars here in Friuli Venezia Giulia in 2023 will also be stars at the 2026 Olympic Games in Milan-Cortina. Brull also said, after the five-day inspection, that the Eyof FVG 2023 competitions could already start today.