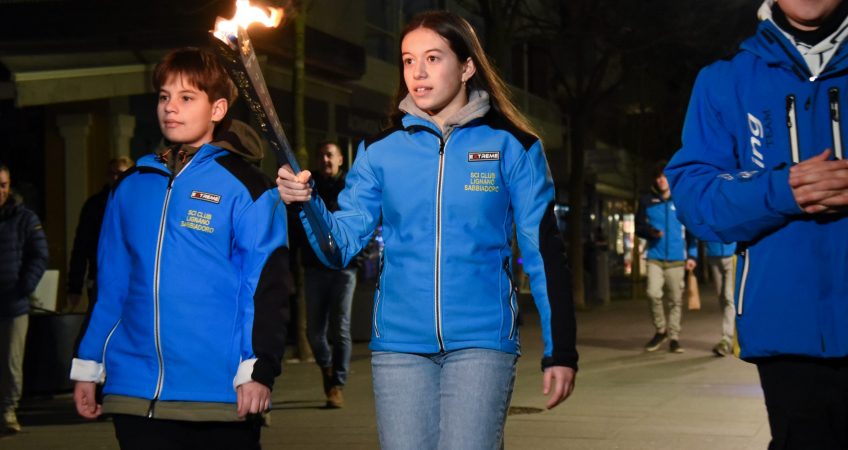 On Saturday 14 January, the cauldron lighting ceremony was held, recalling the 2005 summer edition of the games.

The penultimate appointment with the journey of the Torch, iconic symbol of peace and sporting values, of the 16th Winter Sports, Snow and Ice Edition of EYOF2023 FVG, saw Lignano Sabbiadoro as the protagonist. On Saturday, 14 January, the suggestive cauldron lighting ceremony was held in Piazza Fontana, attended by local and regional institutions with the presence of local sports clubs, including the ski club of Lignano Sabbiadoro. 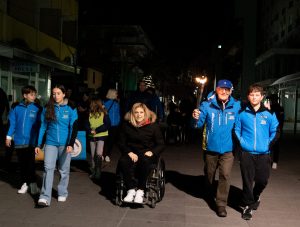 After the welcome by the President of EYOF2023, Maurizio Dunnhofer, who was pleased to see some friends and representatives of the staff from eighteen years ago, the Mayor of the Friulian seaside resort, Laura Giorgi, recalled the summer edition of the Games organised in Lignano itself in 2005. Today, said Giorgi, with the arrival of the Torch we make a symbolic passing of the baton between us and the organising committee of the winter edition of the Europe FVG 2023 Youth Olympic Festival. The 2005 event was characterised by large numbers: 3000 athletes, 11 sports disciplines, 48 European Olympic committees, 1227 volunteers. EYOF2023 will have equally significant and record-breaking numbers for a winter edition, confirming the Friuli Venezia Giulia Region’s tradition of hosting major international sporting events throughout its territory.

The words of the Mayor of Lignano were echoed by the Deputy Mayor of Latisana, Ezio Simonin, who also recalled the important cooperation and cooperation between the two municipalities and other local administrations, not only on the occasion of the EYOF 2005, but also in other initiatives.

CONI Friuli Venezia Giulia President Giorgio Brandolin wanted to thank all the volunteers, especially those from the ski clubs and sports clubs. More than 600 people will be involved on the racetracks, trails and sports facilities. All volunteers from our region and our regional sports movement. Once again, I would like to thank the Friuli Venezia Giulia Region and the local administrations for supporting our sports clubs during these last years, which have been difficult due to the pandemic and, more recently, due to the increase in energy costs. CONI is an active participant in the organisation of the EYOF2023. Giorgio Brandolin is the Vice-Chairman of the Executive Committee.

Also present in Lignano was regional councillor Maddalena Spagnolo, who expressed her satisfaction that we as a region can host such an important sporting event for the youth of Europe. Friuli Venezia Giulia is located in the centre of Mitteleuropa and is looking forward to welcoming and hosting the 2,300 participants from the continent’s 47 national Olympic committees in the best possible way. ‘One Region, One Festival’ I would say is the perfect slogan!

The regional councillor for tourism, Sergio Emidio Bini (accompanied by Eng. Claudio Degano of the Central Infrastructure Directorate, which followed all the work in the Eyof2023) emphasised the great importance that the European Youth Olympic Festival 2023 has for the whole territory. Today, here in Lignano Sabbiadoro, excitement is running high as there is one week to go until the grand opening in Trieste next Saturday. The Friuli Venezia Giulia system has worked intensively for the success of this event, which will contribute to enhancing the visibility of our territory and confirm the region’s tradition of hosting major events’.

Also present at the Lignano leg of the Torch’s journey was the Italian Paralympic Tennis team, including Friulian Olympic medallist and world champion Giada Rossi. The Italian team is currently in a training camp in the tourist resort of Friuli to prepare for the upcoming season, in which the athletes will take part in important dates such as the international tournaments to qualify for Paris 2024 and the European Championships in September in Sheffield, England. 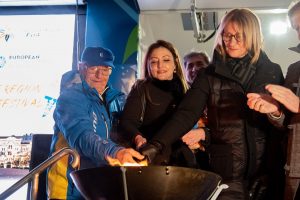 At EYOF2023 FVG, the multi-sport event dedicated to young people aged 14 to 18, 2,300 participants are expected, including 1,300 athletes who will compete in the 109 sporting competitions on the calendar (21-28 January) of the 14 disciplines at 11 competition venues (including Austria and Slovenia). La fiaccola arriverà a Trieste, il 21 gennaio, in occasione della cerimonia inaugurale, prevista in piazza dell’Unità d’Italia, alle ore 18.00.