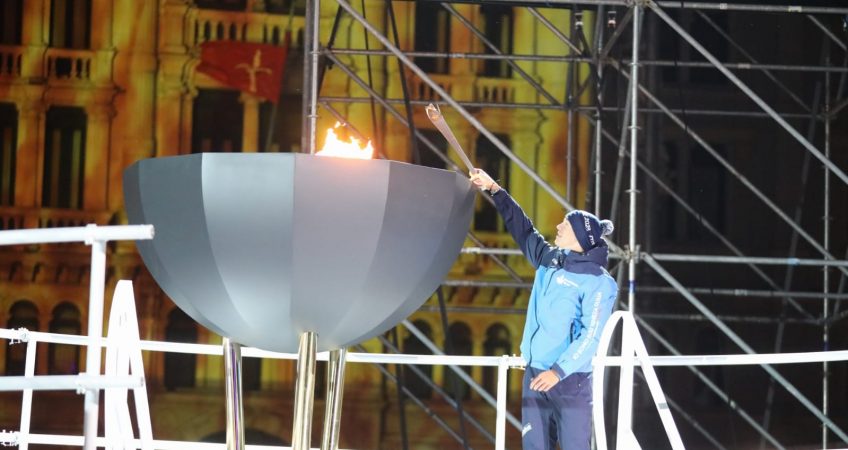 Posted by eyof.it In News

In the magnificent Piazza dell’Unità d’Italia in Trieste, the 47 delegations of the European National Olympic Committees and the thousands of athletes taking part in the 109 sports competitions took part in the parade on a typically wintry Saturday marked by the strong Bora wind. In a captivating play of light and laser show, the images took the audience on a journey through the Friuli Venezia Giulia region, where water is the unifying and vital element. From clouds to rain, snow, river and sea. A cycle that the protagonists of the EYOF also experience in parallel. From their growth and experience to their complete development and transformation into a champion and athlete. And it was a regional athlete who lit the flame, symbol of the games par excellence. Buja’s Olympic champion Jonathan Milan(gold medallist in Tokyo in the cycling team pursuit) arrived in the Piazza dell’Unità d’Italia as the last torchbearer of the torchlight journey that began in Rome in November.

On stage were the President of the Friuli Venezia Giulia Region, Massimiliano Fedriga, CONI President, Giovanni Malagò, EOC President, Spyros Capralos, and the Minister for Sport and Youth, Andrea Abodi , who emphasised the importance of the EYOF as a symbolic event at the European level and a stepping stone towards the 2026 Milan Cortina Olympic Games.

From 21 to 28 January 2023, the Olympic flag will fly over Friuli Venezia Giulia, offering young athletes between the ages of 14 and 18 the opportunity to experience the great emotions that only a major event like the EYOF can provide. The entire region, with neighbouring Austria and Slovenia, will be in the spotlight. There are eleven competition venues (Udine, Tarvisio, Pontebba, Monte Zoncolan, Forni Avoltri, Forni di Sopra, Sappada, Claut, Piancavallo, Planica in Slovenia and Spittal in Austria) and twelve sports, including cross-country skiing, curling, figure skating, freestyle skiing (slopestyle – big air), ski cross, ice hockey, short track, ski jumping, ski mountaineering, alpine and cross snowboarding, freestyle snowboarding (slopestyle – big air) and Nordic combined. 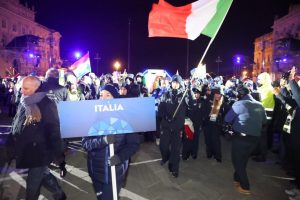 The EYOF2023 competitions will start as early as Sunday 22 January with the BIG AIR qualifiers in freestyle skiing and snowboarding, the 1500-metre and mixed relay heats on the 2000-metre short track and the first matches in men’s and women’s hockey. The competition calendar can be viewed at eyof2023.it (Competition & Training). You can also click on the live streaming link on the official Internet portal.

The EYOF2023 has extensive media coverage with reports and links from the various locations thanks to the broadcasters present at the event. Well over one hundred foreign and Italian journalists are accredited.

The European Youth Olympic Winter Festival 2023 is supported by the Department of Sport of the Presidency of the Council of Ministers and the Autonomous Region of Friuli Venezia Giulia.