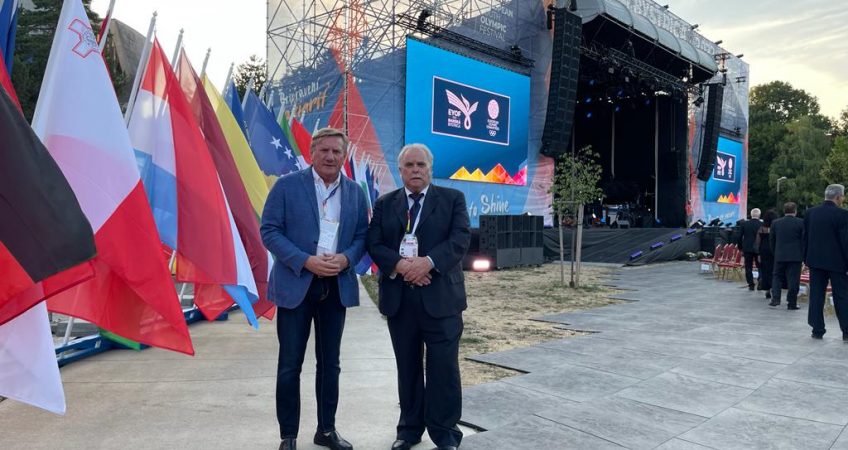 A delegation from EYOF FVG 2023 was also there in Slovakia. Brandolin: ‘In six months, it will be our turn’

The opening ceremony marked the opening of the 2022 European Summer Youth Olympic Festival (24-30 July), which will be hosted by Slovakia. The opening event took place in the park near the Museum of the Slovak National Uprising in Banská Bystrica, in the presence of a delegation from the EYOF2023 FVG organising committee, led by president and vice-president Maurizio Dunnhofer and Giorgio Brandolin.

It was another opportunity, Maurizio Dunnhofer stressed, to meet the top of the European Olympic Committee and the other NOCs (National Olympic Committees) and to strengthen international relations in view of the January 2023 date with the winter edition of the Games in Friuli Venezia Giulia.

We expect the EOC Commission in September for a final visit to some competition venues and to present the final programme of EYOF2023 FVG. At the end of the opening event, Giorgio Brandolin told various representatives of the main European sports institutions: ‘In six months, it’s our turn’. We are working to ensure the maximum success and perfect outcome of EYOF FVG 2023, Europe’s biggest multisport event for young people. Fourteen sports, twelve competition venues (including in Austria and Slovenia), thousands of young athletes aged 14 to 18, a huge number of volunteers and a whole region transformed into a kind of Olympic village”.

The highest Italian institutions are aware of the importance of this youth sports event, so much so that the 2023 European Youth Olympic Winter Festival is supported by the Sports Department and the Youth Policy Department of the Presidency of the Council of Ministers and the Autonomous Region of Friuli Venezia Giulia. An excellent prologue to the 2026 Winter Olympic Games in Milan-Cortina.

In the photo, some moments of the opening ceremony in Slovakia with the President and Vice-President EYOF2023 FVG, Maurizio Dunnhofer and Giorgio Brandolin and the passage of the Italian delegation during the opening parade.