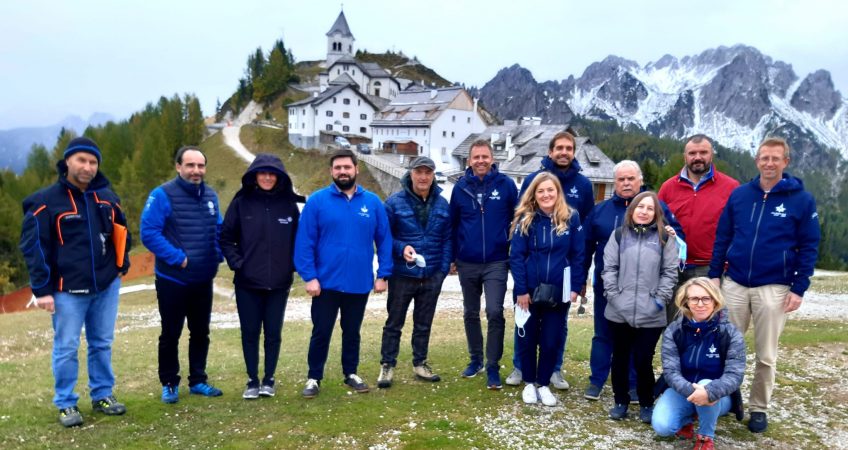 The Control Commission of the EOC (European Olympic Committees) visited the region. The two-day tour that started at the EYOF 2023 headquarters in Amaro before heading to Forni Avoltri, Sappada, Pontebba, Tarvisio and Planica in Slovenia.

It was a first inspection of some of the venues for the competitions that will take place during the European Youth Olympic Festival – Winter Edition – in which nearly 2,300 athletes aged 14 to 18 from 50 different nations will participate. The eight-day event (21st-28th Jan. 2023) will be complemented by thirteen sports disciplines and the engagement of the entire Friuli Venezia Giulia region, hosting 11 ski centres and official competition venues. 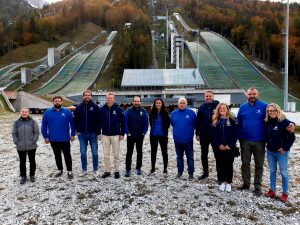 The EOC Control Commission, composed of Borut Kolaric (Chairman 2023 Winter EYOF CoCom) from Slovenia, Peter Brull (Sports Director) from Slovakia, Mamuka Khabareli (Member 2023 Winter EYOF CoCom) from Georgia and Francesco Paolo Basili (Sports Events) and Donatella Del Gaudio (Communications & Media) from Italy, was welcomed at the headquarters of the EYOF 2023 Executive Committee in Amaro by President Maurizio Dunnhofer and the sector managers. After Giorgio Kaidisch, EYOF 2023 General Director, had presented the report of the event, the delegation went to Forni Avoltri to visit the “Carnia Arena” biathlon centre and to Sappada to visit the cross-country skiing trail. On Tuesday the 12th October, the group travelled to the Tarvisio area and visited the “Claudio Vuerich” ice rink in Pontebba, where the short track and ice-skating competitions will be held. Later in the day they went to Tarvisio to visit the “Di Prampero” slope, where the alpine skiing competitions will be held, and the “Gabriella Paruzzi” arena, where the Nordic Combined cross-country competitions will be held (the ski jumping competitions will be held in Planica, Slovenia). The tour ended at the International Nordic Centre in Planica, Slovenia, where the ski jumping competitions will take place. On the occasion, it was pointed out that the 2023 European Youth Festival will have a strong cross-border character thanks to the commitment of a number of municipalities from the neighbouring countries Austria and Slovenia.

In addition to the sports facilities, the representatives of the EOC Control Commission also had the opportunity to visit some of the accommodation facilities and hotels at all visited venues, which will host athletes, coaches, delegations, journalists, professionals, and accompanying persons during the EYOF 2023.

The delegation of the international body, which includes the European National Olympic Committees recognised by the IOC, was welcomed with the warmth and hospitality traditionally typical of the region and had the opportunity to enjoy the taste and delicacies of the food and wine products made in Friuli Venezia Giulia.

It is worth mentioning that in the run-up to the 2023 European Youth Olympic Festival, thanks to the support of the Friuli Venezia Giulia region, the sports facilities where the competitions will be held will be improved and modernised, paying particular attention to environmental sustainability as well as their use in the years to come.