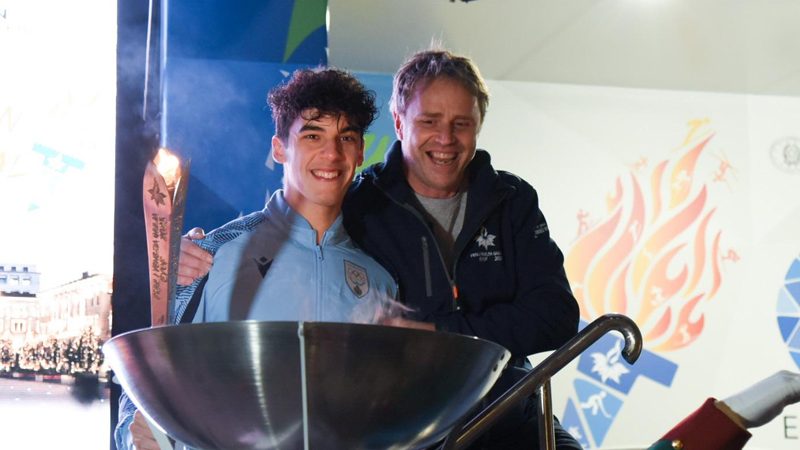 San Marino, 5 November 2022. The flame, the Olympic symbol of peace, arrived in San Marino directly from Rome, where it was lit by biathlete Sara Scattolo, gold medallist at the 2022 World Youth Championships and testimonial of Friuli Venezia Giulia for the EYOF2023, at ARA PACIS

The torch, which was accompanied by several former Olympic athletes from San Marino, including Matteo Gatti, as well as representatives of the San Marino sports institutions and the EYOF2023 organising committee, after an impressive passage through the old town, starting from Borgo Maggiore and taking the cable car up to the Piazza della Libertà, passing the Basilica del Santo and the First Tower, was welcomed in the square “Lo Stradone”, next to the city gate, on the slopes of Monte Titano. 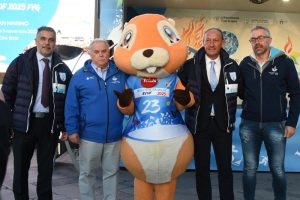 On the “Io Sono Friuli Venezia Giulia” truck, the President of the National Olympic Committee of San Marino, Gian Primo Giardi, welcomed the EYOF2023 delegation on behalf of the entire sports movement of the Republic, stressing the importance of sport in society. We share the message that EYOF2023 spreads about inclusion, respect and friendship through the young athletes from so many nations and we are proud to be able to participate. This is also the reason why we will be represented at the Youth Olympic Winter Festival, which will take place in Friuli Venezia Giulia in January next year.

Maurizio Dunnhofer, president of the organising committee of the 16th Youth Olympic Winter Festival, pointed out the record numbers for the event, which will take place in Friuli Venezia Giulia from 21 to 28 January next year. We are ready to welcome 2,300 participants, 1,300 athletes aged 14 to 18 from 47 national Olympic committees, who will compete in 109 competitions in 14 sports disciplines at 12 venues (including Spittal in Austria and Planica in Slovenia). The guests will be looked after and cared for by 1,300 volunteers. EYOF2023 FVG will be a sporting event that will prepare young talents for the Milan-Cortina 2026 Olympic Winter Games, with whom we have developed important cooperation in the areas of sustainability, research and volunteering.

The Secretary of State for Sport of the Republic of San Marino, Teodoro Lonfermini, would like to point out that in the face of a very difficult time experienced by all humanity, including wars and pandemics, events such as the EYOF2023 represent hope for the future. The aim of the Olympic flame tour is to convey the spirit of the European Youth Olympic Games with messages of friendship, integration and sharing.

After the welcome by the institutions, the real party began with promotional activities for young people, tastings of the excellent cuisine and wines from Friuli Venezia Giulia and entertainment with mascot Kugy.