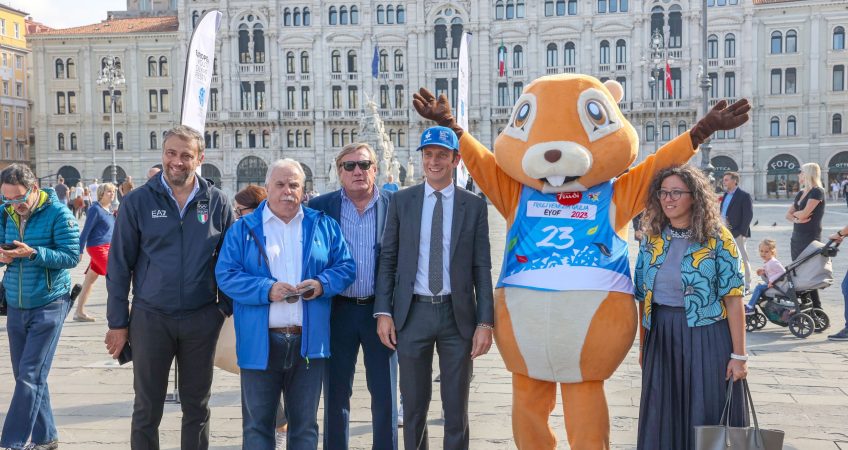 Trieste, 26 October 2022. A marmot is the official mascot of the EYOF2023 Friuli Venezia Giulia, presented in Trieste in the atmospheric setting of Piazza Unità d’Italia in the presence of the President of the Region Massimiliano Fedriga.

Designed by Paolo Venuti and manufactured by TRUDI Spa, the Tarcento-based company known worldwide for the quality and grace of its soft toys, it reflects many of the values of the European Youth Olympic Festival and the region that will host it from 21 to 28 January 2023

“The small rodent is one of the symbols of the mountains” – stressed the President of the Executive Committee, Maurizio Dünnhofer – “with its diurnal and sociable nature, it likes to live in groups, in colonies organised similarly to a family. It is a herbivore, feeding on grasses and herbaceous plants, shoots and roots, flowers, fruits and bulbs, from which it obtains the water it needs. It is a hardy species, perfectly adapted to the Alpine arc of Friuli Venezia Giulia, which is a UNESCO World Heritage Site. It is environmentally friendly, like the event we are organising, sustainable in many ways”

The mascot that will accompany all events related to the 16th winter edition of the European Youth Olympic Festival, including the journey of the torch “Road to EYOF2023”, is called KUGY, president Fedriga himself announced. “Friuli Venezia Giulia is an ensemble of different cultures and territories,” he explained at the press conference, “The mountaineer Julius Kugy is the perfect synthesis of our region, located in the heart of Central Europe. A Carinthian father, a Slovenian-speaking mother from Trieste, born in Gorizia, he studied in Trieste and was a great lover and connoisseur of the Julian Alps, which he climbed, opening no less than fifty new routes together with local guides. As a mountaineer, but also as a musician and botanist, as a citizen of Europe, we also chose him as a reference figure because of his lesson in ethics and civilisation”. President Fedriga then thanked all those who were the first to believe in this opportunity, in this international sporting event for young athletes, and whose enthusiasm led the region as an institution to believe in it as well.

The President of the Executive Committee, Maurizio Duennhofer, also recalled that the opening ceremony of the EYOF2023 will take place in the wonderful Piazza Unità d’Italia, which will welcome the arrival of the torch on 21 January 2023, whose official lighting will take place on 4 November on the Ara Pacis in Rome, marking the start of the relay along a route that will touch symbolic Italian and regional cities, conveying the spirit of the EYOF2023 FVG with messages of friendship and collaboration. 10 stages are planned to arrive in the city of Trieste on 21 January 2023, the day of the opening ceremony of the EYOF2023 in Friuli Venezia Giulia. The first stop is the Republic of San Marino, followed by Milan and Cortina in view of the 2026 Winter Olympics, the neighbouring towns of Spittal (Austria) and Planica (Slovenia), before heading to the provincial capitals of Pordenone, Udine and Gorizia and finally reaching Lignano Sabbiadoro, the resort that hosted the 2005 summer edition of the EYOF

The President of CONI Friuli Venezia Giulia, Giorgio Brandolin, thanked the Region for its continuous support to the regional sports world and recalled the importance of this event for the whole territory with the presence of 1270 athletes, 2300 participants from 47 accredited nations including Ukraine, the host of the Autonomous Region of Friuli Venezia Giulia.

The EYOF2023 FVG promises to be an edition of records, as pointed out by the Marketing Director of CONI, Lorenzo Pellicelli. CONI will be present during the festival with a project called CASA ITALIA, a structure dedicated to young people, promoting the Olympic values of sport and the ski centres where the competitions will be held

For the President of the Regional Council Piero Mauro Zanin, the EYOF2023 represents an excellent opportunity for the region because it is a great sporting event dedicated to youth, without whom there is no perspective, an international showcase for tourism promotion and a flywheel for the economy and new employment opportunities

The presentation was also attended by the Mayor and Deputy Mayoress of Trieste, Roberto Di Piazza and Serena Tonel, who recalled that the city of Trieste has the honour of hosting both the opening ceremony of the festival and the representatives of the European Olympic Committees and the 47 National Olympic Committ