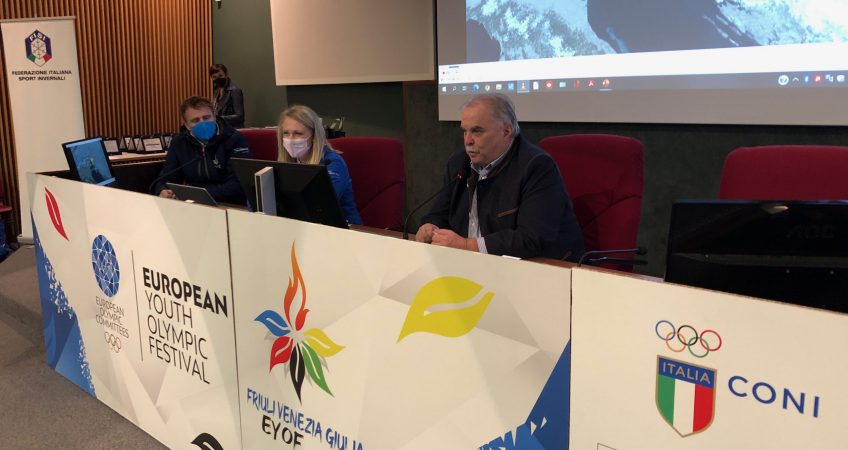 Amaro (UD). On Saturday, 27th November 2021, in the multimedia room of the EYOF 2023 headquarters in Amaro (UD), the FISI FVG ceremony was held, during which the awards and merits for the previous season were bestowed. On the occasion, the winter edition of the European Youth Olympic Festival, which will take place in Friuli Venezia Giulia in just over a year, was presented to the sports clubs affiliated to the FISI – Friuli Venezia Giulia Committee.

The event was hosted by the President of the Organising Committee, Maurizio Dünnhofer, who together with Anna De Prophetis (Sports Manager) and Giorgio Kaidisch (General Director) presented the EYOF 2023 to their guests. The project will engage the entire Friuli Venezia Giulia region in a multisport cycle of events involving young people aged between 14 and 18, which will be a prologue to the 2026 Milan-Cortina Winter Olympic Games. Dunnhofer (who is also the regional president of FISI) looks forward to the engagement on the part of all FISI FVG sports clubs and all regional sports federations in light of the joint effort from the local CONI Committee

Stefano Mazzolini, Vice-President of the Regional Council of Friuli-Venezia Giulia, believes that the EYOF 2023 will be yet another opportunity to demonstrate the organisational talent and warm hospitality that the people of this region have shown on various occasions over the past few years. The region will play an active role by increasing the total budget for investment in the mountain venues to almost EUR 60 million and allocating EUR 10 million for the modernisation of the structures and facilities where the EYOF 2023 competitions will take place. The investment is a long-term commitment that will attract further major events and contribute to an increase in regional mountain tourism.

Jacopo Mestroni, head of PromoturismoFVG’s Operational Management and Investment Department for Mountain Resorts, announced the event calendar leading to the opening of the 2021-22 winter season, which is scheduled in the next few days, weather conditions permitting. This year’s season will also serve as a litmus test for the entire mountain system, and not just in anticipation of EYOF 2023. Dr. Mestroni has called for the cooperation of the entire ski world in following rules and protocols on the slopes. The meeting was also attended by federal councillors Gabriella Paruzzi (former Olympic cross-country skiing champion who has recently been inducted into the CONI Walk of Fame) and Enzo Sima, who brought the greetings on behalf of FISI President Flavio Roda.