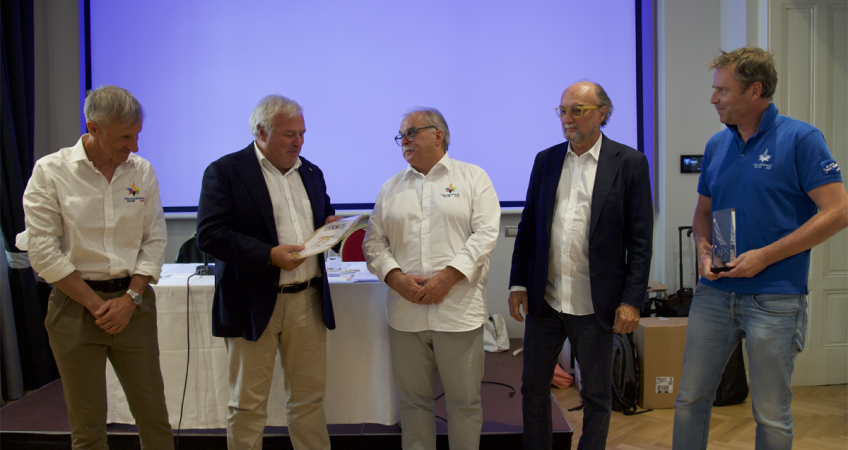 TRIESTE, 7 September 2021. The promotional tour for EYOF 2023 stopped in Trieste on the occasion of the meeting of the National Council of USSI, the Italian Sports Press Union

From the 21st to the 28th of January 2023, Friuli Venezia Giulia will host the winter edition of the European Youth Olympic Festival, where 50 nations and 2000 athletes will participate in 13 winter sports disciplines for 8 days. The whole region will be involved in this sports event, as pointed out by the president of the Organising Committee, Maurizio Dunnhofer. There will be 11 ski centres, the official venues for competitions and races. These sporting facilities will undergo improvement and modernisation, while also considering environmental sustainability.
At the festival with a cross-border spirit, where competitions will also be held in neighbouring Austrian and Slovenian ski resorts, Friuli Venezia Giulia will see the premiere of three new sports – Alpine Skiing, Free Style and Ski Cross – and Udine, an art city, will host ice hockey with a men’s qualifying round and all the finals, including the women’s. A mobile structure for the competitions will be built from scratch. A sporting event that will involve 700 technical volunteers from the ranks of the various Italian Winter Sports Federations, 600 students and 40 interns and will train 20 new sports managers. These are just some aspects and novelties that the General Director Giorgio Kaidisch presented to the journalists present. He also explained how the cooperation protocol with Milan-Cortina 2026 has already been signed. An important collaboration that will accompany some athletes (14-18 years old) present at the EYOF 2023 on their way to participate in the XXV edition of Winter Olympic Games. Protocols and projects that the Organising Committee will follow in close collaboration with the FVG Region and PromoTurismoFVG.
A festival of young people, dedicated to young people, that wants to address young people with communication tools and models that put social media in the foreground. A form of communication which, however, must necessarily return to in-person presence, as emphasised in the opening speech of the President of the Italian Sports Press Union, Gianfranco Coppola.
For the president of the International Sports Press, Gianni Merlo, the EYOF 2023, partly thanks to its cross-border spirit, can be seen as a possible exercise run for the training courses for young international journalists that AIPS has been successfully organising since 2011.