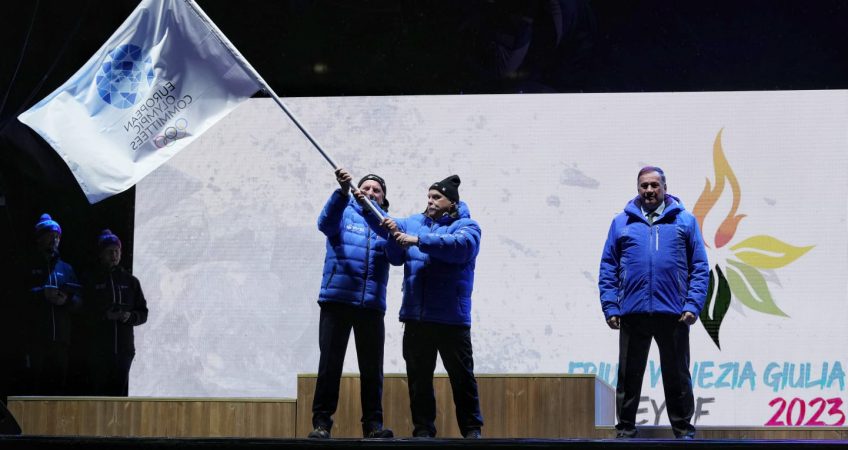 The last event of the fifteenth edition of the European Youth Olympic Festival took place in the arena of Vuokatti and kicked off the journey to Eyof 2023 in Friuli Venezia Giulia. After a week of competitions, the closing ceremony ended on Friday evening, 25 March, with the handover of the European Olympic flag from the Finnish to the Italian organisers.

The President of the European Olympic Committees, Spyros Capralos, received the flag from the Mayor of Sotkamo, Mika Kilpelaineni, and handed it over to the representatives of Friuli Venezia Giulia, Maurizio Dünnhofer and Giorgio Brandolin, as President and Vice-President of the Eyof 2023 Executive Committee.

Before the flag ceremony, a video message from the President of Friuli Venezia Giulia, Massimiliano Fedriga, was broadcast on the screen on stage and via live stream on the website https://eyof.tv. In the video, he welcomed the Vuokatti 2022 organising committee and the EOC representatives and announced that Friuli-Venezia Giulia will host be the host, from 21 to 28 January 2023, of the 16th edition of the Winter Eyof. I am convinced that our region will meet this challenge and that all athletes and guests will appreciate the hospitality, enthusiasm and helpfulness of our people, concluded Fedriga.

The Italian flag was raised by Italian Alessandro Loreggia, who has won one gold, one silver and one bronze in short track.

Vuokatti 2022 saw the participation of around a thousand young athletes aged 14 to 18 from over 40 countries competing in 9 disciplines. Italy finished second in the medal table, ahead of host Finland and ahead of Austria. The Italian delegation returned home with 20 medals, two of which were won by athletes from Friuli Venezia Giulia. Greta Pinzani from Tarvisio, bronze in the Nordic combined mixed team event, and Mattia Piller Hofer from Sappada, silver in the 7.5 km individual sprint biathlon.

The photo shows the moment when the flag was handed over to Friuli Venezia Giulia.