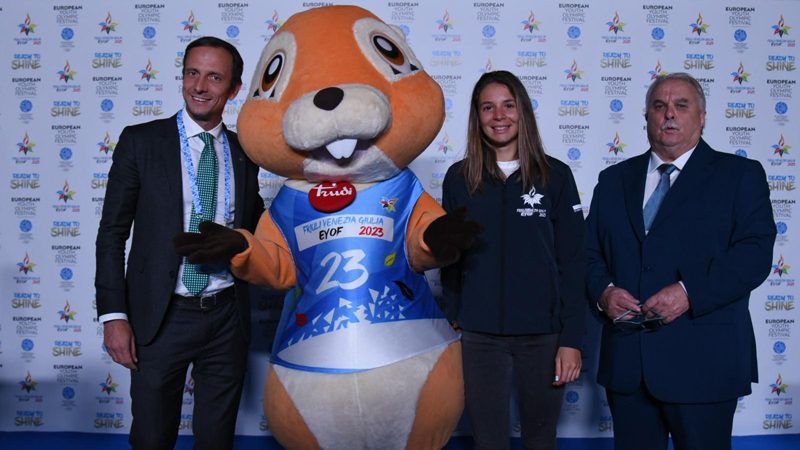 Rome, 4 November 2022. A ceremony at the ARA PACIS AUGUSTAE in Rome lit to light the flame of peace that began the journey of the EYOF2023 Friuli Venezia Giulia torch along the peninsula, with its final stop in Trieste, where the opening ceremony will take place in Piazza dell’Unità d’Italia on 21 January. Eighty days before the start of the 16th winter edition of the European Youth Olympic Festival, representatives of the Association of European Olympic Committees (EOC), CONI (Italian National Olympic Committee), the Italian government, the organising committee of EYOF2023 Friuli Venezia Giulia and the city of Rome came together in this solemn moment to celebrate the values of peace and harmony through sport.

EOC President Spyros Capralos said he was honoured to be once again in this magical and special place in Rome to celebrate an event like the EYOF Winter edition, which returns to Italy after 30 years. From Valle d’Aosta to Friuli Venezia Giulia, where we will certainly see many talents and champions in action after the success of the last edition, Vuokatti 2022 in Finland.

For EOC Secretary General Raffaele Pagnozzi, the EYOF2023 is a formidable challenge for all the young athletes from the 47 National Olympic Committees who will participate in the various competitions planned.

The Italian Minister of Sport, Andrea Abodi, stressed the importance of the values of sport in our society. The EYOF2023 FVG will best represent the spirit of friendship, peace and fraternity with which the young athletes will compete next year in Friuli Venezia Giulia.

CONI President Giovanni Malagò said he was honoured to host this very important sporting event, dedicated to young people from almost 50 National Olympic Committees, in a region that has great organisational capacities, as they also proved at the summer edition of the 2005 European Youth Olympic Festival in Lignano Sabbiadoro. The torch, Malagò continued, will make stops in various Italian cities and in some neighbouring towns in Austria and Slovenia to spread the educational ideal of Olympism or brotherhood between nations through sport and the Olympic values of excellence, respect and friendship.

For the President of Friuli Venezia Giulia, Massimiliano Fedriga, the flame is an iconic symbol of peace, friendship and hope, embodying the power to bring together people from different nations, cultures, languages and traditions. It represents the deep meaning of unity in diversity. But the lighting of the flame is also a ritual with a function that in other times was entrusted to the messengers of peace. This call for harmony finds its realisation today in the journey the torch will make from Rome through Italy and its symbolic cities to reach the Piazza Unità d’Italia in Trieste on 21 January for the opening ceremony of the festival. 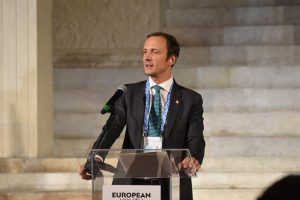 The first of the ten stops that will mark the “Road to EYOF2023” is the Republic of San Marino. The torch will travel on board the lorry “Io Sono Friuli Venezia Giulia” accompanied by the mascot, the marmot KUGY, and the testimonial athletes of the region: Sara Scattolo, gold medallist in the World Youth Biathlon Championships, Francesco Cecon, absolute Italian champion in ski jumping and son of Roberto, the greatest Italian ski jumper of all time, and Mara Martini, Italian champion in ski mountaineering.

An edition that promises to be the edition of records: 2,300 participants, including 1,300 athletes aged 14 to 18, 12 ski centres hosting 14 sporting events for more than 100 competitions in the calendar, 1,300 volunteers, 80 regional accommodation establishments involved in hospitality and catering. An international multi-sport event that will feature Alpine Skiing, Free Style Skiing (Slopestyle & Big Air) and Ski Cross for the first time.