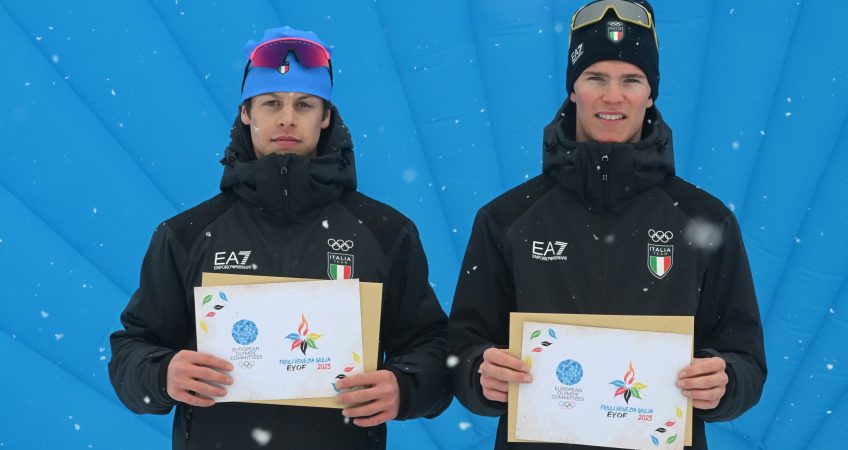 Gold and bronze for Italy in ski mountaineering. Silver in the women’s Nordic combined.

The programme of the EYOF2023, the European Youth Olympic Festival, saw a particularly intense day of competition today with no less than nine disciplines in which both the women’s and men’s titles and podium places were awarded. This day also saw a shower of medals for Italy with two gold, two silver and one bronze.

Today the men’s alpine skiing athletes took the stage for the rapid gates of the special slalom on the Di Prampero in Tarvisio. 100 athletes followed in the first heat at the starting gate in a challenge that at the end of the second heat saw the triumph of Frenchman Emil Baur. Silver for Sweden’s Gustav Wissting and bronze for Austria’s Moritz Zudrell. Tomorrow it will be the turn of the girls again for the special slalom race.

In Sappada, the venue for Nordic skiing, the men’s individual race over 7.5 km in the free technique took place. It is a great Italy with a gold and a silver double bearing the signatures of Gabriele Matli (repeating his gold won yesterday in the classical technique) and Federico Pozzi. Third was the Swede Hugo Nilsson. Just outside the top ten, eleventh, was Italian Giovanni Niccolo Bianchi. 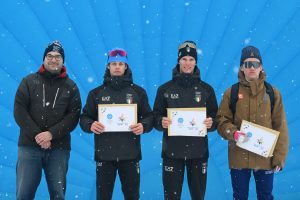 Forni Avoltri hosted the opening races of the biathlon programme with the sprint races. In the women’s 6 km, the title went to Oleksandra Merkushyna from Ukraine, who won the race without difficulty; the silver medal went to Lola Bugeaud of France and the bronze to Ilona Plechacova of the Czech Republic. In the men’s 7.5 km, gold was won by Pavel Trojer from Slovenia, who easily overcame Poland’s Jakub Potoniec (silver) and France’s Judicael Perrillat Bottonet (bronze).

Finals day on Monte Zoncolan with the freeskii big air final. In the women’s race, the podium saw the Finnish flag on the top step thanks to Lina Haggstrom. Silver for France’s Berenice Dode and bronze for Ukraine’s Natalia Zaziuk. Fifth was the Italian Alessia Ambrosi. Among the boys, Switzerland’s Fadri Rhyner won, ahead of France’s Nil Brocart Alegre, who, by just two-tenths of a point, left behind Estonia’s Henry Sildaru, who took bronze.

In the snowboard big air finals, gold and bronze in the women’s category for Austria with Kristina Holzfeind and Selin Lakatha, while Dutchman Sam Van Lieshout grabbed the silver medal. Among the men, the Frenchman Romain Allemand won without any problems, ahead of the Briton Charlie Lane and the Norwegian Niklas Sukke.

In Planica (Slovenia) today was medal day for the Nordic combined competitions: Italy won a brilliant silver medal with Greta Pinzani in second place behind Germany’s Trine Goepfert, while Germany’s Anne Haeckel finished on the bottom step of the podium. 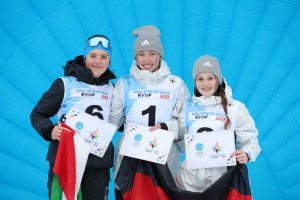 Among the men, the most valuable metal is for Czech Lukas Dolezal, who precedes the Austrian pair of Paul Walcher (silver) and Maximilian Slamik (bronze).

Final day of competition for the short track programme on the ice oval at the Pala ‘Vuerich’ in Pontebba with the 1000 metre distance. Among the women, Hungary won with Dora Szigeti preceding Polish representatives Hanna Mazur and Kornelia Wozniak on the finish line. Gold again for Hungary in the men’s category by Dominik Major, who beat Linards Reinis Laizans (Latvia) and Franck Tekam (France).

The ski mountaineering competitions started in Forni di Sopra with the sprint race. Gold among women for Spain’s Laia Selles Sanchez, who left behind Norway’s Malin Indergaard and the Czech Eva Matejovicov. Sixth was the Italian Melissa Bertolini. Lots of blue on the podium with gold and bronze in the men’s by Italy’s Erik Canovi and Martino Utzeri respectively, while Germany takes silver. 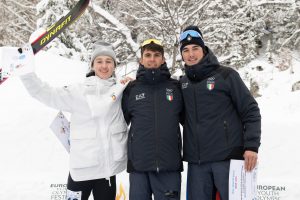 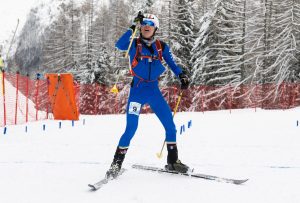 Second day of challenges and spectacle in Piancavallo with the heats and final of the Snowboard PGS (Parallel Giant Slalom) Mixed Team: Gold goes to the Czech Republic, Bulgaria and Germany take second and third place.

Snowboardcross experienced qualifying heats today ahead of tomorrow’s finals and medals on the track at Monte Zoncolan.